11-15 Borough High Street is a commercial building forming part of the Thameslink programme's Borough Viaduct project, which the practice also designed and delivered.

The building comprises retail at ground and basement levels, and office accommodation on three upper floors, and replaces a larger Victorian terrace that was demolished to facilitate the erection of the new railway bridge. The brief was to provide a contemporary replacement structure that would preserve and enhance the character of the Conservation Area that the site is located within.

The façade of the new building is aligned flush with the adjacent listed former St Thomas’ Hospital (now Post Office) to improve its prominence, and this arrangement allowed the formation of a small public piazza surfaced with York Stone.

The form of the building provides good levels of natural light and incorporates a solar water heating system. Archeological remains of a Roman bath house found during excavation were protected by redesign of the raft foundation. 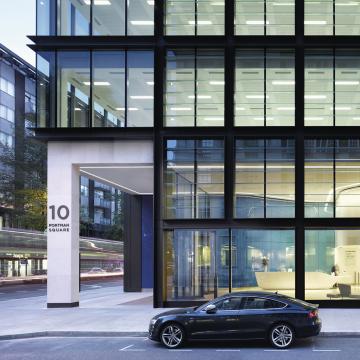