This project provides 150 new homes across two new buildings bookending the site, whilst simultaneously regenerating the canal-side park for the local community.

Demolition of a linear 1960s social housing block created an opportunity to connect Bartlett Park to the Limehouse Cut canal, regenerating the park as a place for all, rather than just dog-walkers and footballers, and encouraging more diverse use of the canal.

150 new homes are contained in two complementary buildings that complete and reinforce a row of existing buildings on Stainsby Road. The new buildings share an aesthetic composition of robust, gridded brick façades with highlights of richly coloured glass infill panels.

The northern building, which addresses both park and canal, contains a café, community space and a Waterside Centre that provides local children with the chance to learn to kayak on the canal. This exploitation of the Limehouse Cut for leisure use was actively supported by British Waterways and continues a theme of connecting residential development to the canal that was started at a neighbouring Jestico + Whiles’ scheme, Abbott’s Wharf, where a new mooring basin was formed and is fully occupied with barge-houses. 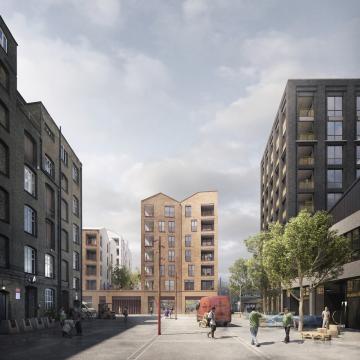 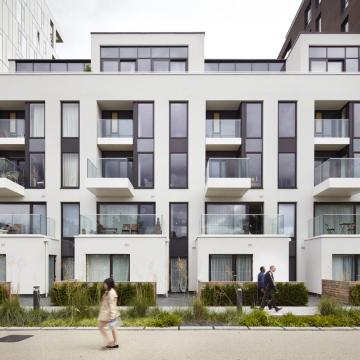